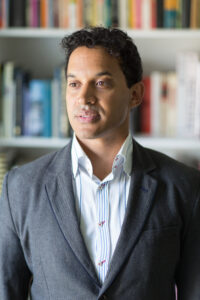 Michael began as ACTRA PRS & ACTRA RACS Director in February of 2021. A former performer with an MBA, CPA, and an honours Bachelors in Music Technology, Michael brings with him a wide range of culture, arts, media and music industry experience and rights administration perspective. Michael held roles as Executive Director of the Toronto Musicians’ Association, Local 149 of the AFM, Popular & World Music Officer at Ontario Arts Council and Executive Director of UrbanArts.  Michael has led projects to advance the protection and rights of diverse performers in Canada, such as beats.mind.movement, Firekeepers, and Respectful Workplaces in the Arts. As Director of ACTRA PRS and ACTRA RACS, Michael led the collection of over $16 million CAD in labour residuals in 2021-22, a record year for ACTRA PR,  alongside over $10 million CAD in sound recording royalties through ACTRA RACS.  Michael led labour residual use fees negotiations and has led a new path for ACTRA in the advocacy for performer royalties in Canada. As part of his role Michael serves as Treasurer of the Canadian neighbouring rights licensing organization Re:Sound.